[This is an archived interview from the original Elucidations.us site, March 2008] 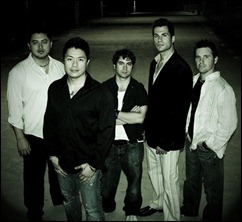 Originally from New Orleans, Adam’s Attic is making waves in their new home base of Los Angeles. In November 2006, they ranked 28th out of the top 100 powerpop bands on Myspace.com. Not only have they performed shows at the Hard Rock Café and the Roxy, they sold out the House of Blues as the headlining act. With several band members having strong military roots, they have also been part of Armed Forces Entertainment, which took them across the ocean to the Mediterranean and Greenland, and have played at many functions honoring the military.

The 5 member band, which includes songwriter Joe Henry on vocals, Derek Henry on bass, keys, and vocals, Scott Boaz on drums, Joe Blanchard on lead guitar and vocals, and Frank DeSalvo on rhythm guitar, is currently gearing up for a Pacific Tour this summer. I was fortunate enough to grab a few minutes of Joe's time recently.

LK: Where did you get your band name?
Joe Henry: A lot of the songs I write deal with relationships. It could be with a girl and a guy or with a father and son... Life is all about developing relationships. I came up with "Adam" because he was the first person to have a relationship with a girl, Eve, way back in the day. I was going through a bad breakup during this time of my life so "Attic" represented all of the stuff I was trying to clear out of my head.

LK: What is the best inspiration for your work?
Joe Henry: Anything that triggers an emotion. It could be a personal situation, a dream, a conversation, a special moment... It could even be a movie that grabs me. I am not good at writing material that is slick or clever. I can only write what I know or feel. My songs are definitely small personal pieces of me.

LK: What do you like best about touring?
Joe Henry: Seeing new places and meeting new people.

LK: What do you most dislike about touring? How do you prevent burnout?
Joe Henry: Leaving family and friends behind. It is awesome to have the experience of seeing new places but it is bitter sweet because the people that I really want to share those moments with are usually not with me while we are on the road.

LK: “Autumn” was written about the military stemming from your personal military history. Is there another song in particular that has special meaning you would like to share?
Joe Henry: I have a deep personal attachment to every single song I have written. Recently, I wrote a song called "My apology." It is the most personal song I have ever written. There is definitely a special meaning behind that one.

LK: If you could perform with any band or artist (living or dead), who would it be and why?
Joe Henry: I would love to perform with The Counting Crows. Adam Duritz has had a huge influence on my writing. I have seen that band a bunch of times live and they blow me away every time. His lyrics are genius!

LK: As an indie band, how do you feel about the state of indie vs. industry music today?
Joe Henry: I really don't get too caught up in that area of music. We are who we are and we just do what we do. It is hard enough to keep ourselves on track so we don't waste time worrying about issues that we have no control of.

LK: While writing songs, which comes first: music or lyrics, and why?
Joe Henry: I usually come up with some sort of basic chord progression and melody first. Then I come up with the lyrics. Once the basic structure of the song is down, I will bring it to the rest of the band so they can add their creative parts.

LK: If you had the chance, would you change your musical style to suit an "image" a recording label has created for you and your band? Or would you stick to your own style and image even if it meant losing a contract?
Joe Henry: We don't claim to know everything about music or writing. With that being said, we take critcism very well and we are open to improving ourselves. If that means we have to change a few things to become better we will. We will not change who we are as individuals to fit a mold that someone else has created for us. our music relfects who we are and we stand behind that.

LK: How do you feel about kids idolizing their favorite musicians? Do you feel singers/songwriters have a personal responsibility of any kind regarding young kids who may be listening?
Joe Henry: I don't think that people should idolize anyone...I do know that this happens with the entertainment industry and that is just part of the package. Ultimately parents have the responsibility to mold their kids into better people. I try my best to live my life as an example but we do fall short from time to time...everyone does.

LK: Have you had interesting run-ins with fans?
Joe Henry: Nothing over the top. We are always taken back when fans take the time to get to know us. We love that.

LK: What other jobs have you had?
Joe Henry: Sales, telemarketing, IT recruiter

LK: Do you have any tips for beginning singers/bands on how to find places to play, get record deals, etc.?

Joe Henry : Yes. You have to be willing to take criticism. Get a good manager that you trust and just get out there and start playing as much as you can. Most importantly, have fun!

LK: You mentioned you have big events on the horizon. Can you share with us? What is next for Adam’s Attic?
Joe Henry: We have a new record coming out soon that we are very excited about...We are also touring Singapore and Diego Garcia this summer. More exciting news will be released shortly.

LK: Have you ever considered writing a theme song for a novel?
Joe Henry: I actually wrote a song based on a Nicholas Sparks novel called "The Notebook." That song will be on our next record and it is called "Breathe."

***
I want to thank Joe for his time and his willingness to chat with us. Check out the Adam's Attic website and watch for shows in your area!

“Growing up with fathers in the military taught us about doing the right thing, discipline, and resilience to a life that is always changing. It also made us appreciate the personal sacrifices made by all military personnel.”
Adam's Attic

This site replaces the old Elucidations.us arts site. Interviews from there will be transferred here. Because this upkeep is much simpler, and easier to share with others, look forward to more interviews with indie artists, plus reviews, essays, and features.

The site is family friendly. Any links to adult-natured content will be marked.

All writing here will be done by independent writers and other independent artists, published and not. Content will be supervised by staff, but all work remains property and responsibility of its author.

Have an indie author you'd like to see highlighted here? Leave contact info (website, etc) in the comments. Don't leave private info such as non-business email addresses. This is available for public viewing. No self promo, please.

Enjoy! And support your local indies!

A lot of very nice fonts completely free for your indie art projects.

Elucidations.us is created and maintained by Elucidate Publishing. It will feature not only indie books, but also fine arts, music, dance, theater, and any other independent do-it-yourself art we come across.

We believe indies are the heart and soul of the arts as they tread their own paths and create what they feel, regardless of current trends. We encourage them in that path.

Elucidations.us and Elucidate Publishing are owned by author LK Hunsaker. Hunsaker has a BS from UMUC and an AA from ICC, with emphasis in psychology, art, and English. She is published in ezines, anthologies, and print magazines, has founded her own company to suit her needs of individualism and creative control, and often assists other authors with their publishing goals.

K. Hawkins is EPs technical director. Hawkins has an AS in computer programming and has done further job training on her own. She is also an avid reader and crafter.

Find an Indie Store near you!

Create your own ebooks!