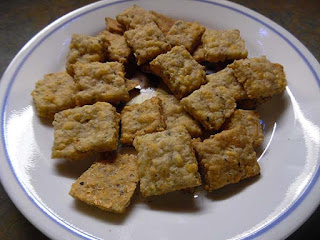 Anyone who has taken care of a toddler knows they tend to eat like mice, not much at a time, but constantly foraging. I've become somewhat of a health nut in the past few years, so while, when my own little ones needed a quick snack, I opened a box of crackers, still trying to stay on the healthier side of things, and thought I was doing well, I now search for better options as I can. With GMOs and all kinds of preservatives and such, whether that's new or I wasn't aware enough before, I even hesitate to give the grandbabies store-bought "healthier" crackers.

I'm not an "always looking for things to do to keep myself busy" grandma. Well, I do keep myself busy, far more than I can keep up with, but I'm a working grandma, an at-home working grandma with one of the little ones living here, which gives me triple duty. Still, health matters, so I keep trying to find quick ways to focus on actually healthier things for all of us. (Grandma has to stay healthy, too, so she can keep up!)

A while back I found this recipe for cheese crackers, an alternative to those bright orange cheddar crackers from a box:

Pulse 1st 3 ingredients in food processor, add butter and pulse until ball forms, adding water if needed. Roll out onto floured surface, cut thin, and bake at 400 for 13-15 minutes until golden brown.
(Apologies for not writing down where I picked this up months ago.)

It worked pretty well. They were good, better than the box version. But I'm a creative type when it comes to cooking, also. I like to change recipes to suit my own needs. A couple of days ago, I tried it again with my own flair, and here's what I did:

I pulsed everything but the butter just enough to mix them together, and I didn't bother to let the butter soften first. That might be why I had to add about 3 tbs of water before it would ... well, it didn't form a ball (the first time, either), but it did get moist enough that when I dumped it out on the flour-coated counter, I could easily press it into a ball and then roll it out.

I apparently rolled it thicker than they intended, also, since they took 15-20 minutes to be cracker-crisp (at 400 degrees). I did pull out the thinner edge pieces when they were done and then stick the rest back in. So if you're more careful than I was with your rolling, you could leave them all in for the same amount of time. If you want more pieces and faster baking, roll them as thin as you can while still being able to pick them up and transfer them to the baking sheet.

They turned out very well and I'll use my own recipe from now on. You could use any shredded cheese. I used what I usually have, and I like it better than cheddar. All whole wheat flour is fine, too, and better if you don't mind the harshness.

Oh! I actually did two batches while I was making a mess (um, baking - kind of the same thing for me) anyway, and in the second batch I added some Parmesan cheese, which then needed a touch more water. Both are pretty good - enough even the adults in the house were grabbing them, myself included.

I have them stored in a closed container. They'll last as long as you need them to last, I imagine, which around here, won't be long. If you make a bunch, you could always freeze part of them to keep them fresh.

If you make them, I'd love to hear your thoughts, especially if you make your own adaptations.

[Note: I'm a dabbler in the kitchen, not a professional. Take my advice at your own risk.]

A lot of very nice fonts completely free for your indie art projects.

Elucidations.us is created and maintained by Elucidate Publishing. It will feature not only indie books, but also fine arts, music, dance, theater, and any other independent do-it-yourself art we come across.

We believe indies are the heart and soul of the arts as they tread their own paths and create what they feel, regardless of current trends. We encourage them in that path.

Elucidations.us and Elucidate Publishing are owned by author LK Hunsaker. Hunsaker has a BS from UMUC and an AA from ICC, with emphasis in psychology, art, and English. She is published in ezines, anthologies, and print magazines, has founded her own company to suit her needs of individualism and creative control, and often assists other authors with their publishing goals.

K. Hawkins is EPs technical director. Hawkins has an AS in computer programming and has done further job training on her own. She is also an avid reader and crafter.

Find an Indie Store near you!

Create your own ebooks!